Using the teleteaching tool for the first time during a semester is not recommended. Try to setup your gear a little bit beforehand and test it! Make sure, to keep using the most recent version of the tool!

The Teleteaching Tool in its current state is used to record many lectures at the TUM. However, it may miss a few features, that might be crucial for adopting it to record Your lecture. Please let the developers know, what features are missing for You. Please keep in mind, that although we are open for proposition, we might need time to implement them in the TTT - a certain delay is therefore inevitable in most cases.

The teleteaching tool is an application for recording and postprocessing lectures. Development of the TTT started at Universität Trier by Peter Ziewer, and is continued here at TUM. It offers Screengrabbing, audio and video recording of arbitrary lectures or presentations. During lecture mode, all programs that You start will are recorded. You can use paint tools to annotate the whole screen in lecture mode: 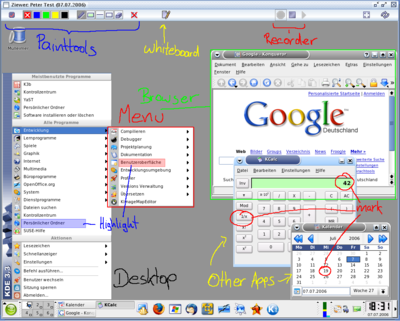 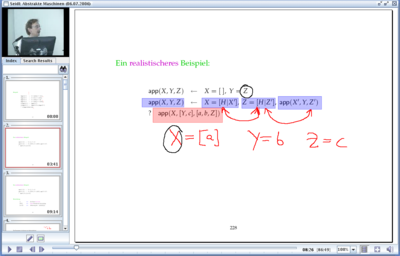 The recorded talks can be converted not only into TTT's proprietary lossless format, but also into flash applets or .mp4 video podcasts, and downloaded here.

Latest Changes in a Glimpse

If You are interested, in how the TTT works, You can download and compile the TTT, following compiling section!